The 12-Step Program, originally developed by alcoholics in the 1930’s (based on religious principles garnered originally from the Torah), has helped millions of people break free from many kinds of addictions. Amazingly though, this program doesn't focus on the problem/addiction itself, but rather on achieving and maintaining a healthy spiritual state/condition. For this reason, not only addicts can enjoy the transformational benefits of this program. With Steps-To-Living, the revolutionary 12 Step program is now available to the general public for the first time.

S2L is mainly for two groups of people:

2) Anyone who suspects that they may need the 12-Steps. S2L can help those who suspect that they may be suffering from an addiction but who are still wary of joining a 12-Step group. For such people, S2L can serve as a bridge by enabling connection with others in similar situations, thereby affording an opportunity to learn more about the program and how it can help.

Do you suffer from any of these unwanted behaviors?

This simple program has helped millions of addicts - surely it can help you!

Am I an Addict?

Then you may be dealing with an addiction.

If any of these apply to you, you may have an addiction.

Not sure if you are ADDICTED? Take one of Retorno's quizzes to see for yourself:

Young and old, rich and poor. ADDICTION does not discriminate. It can affect anyone, at any time.

'What consumes your mind controls your life.'

Addiction feels like a dark, bottomless pit that no one else could possibly understand. You're beyond help. Sometimes, you're not even sure you want to get out, you've been this way for so long, you've given up hope that things can ever be different.

S2L is for any addict, anyone who wants to be free of a destructive habit in their lives no matter what it is.

Ask yourself this; have you ever tried stopping only to find that you can't? Are your unwanted behaviors getting progressively worse?

Are the 12 Steps for addicts only?

Addicts have the most success with the program because they have come to realize that they are on a collision course with "rock bottom", spurring them to work the program with great desperation. Often an addict will look back and realize that his addiction was really a blessing in disguise, because it forced them to work this life-changing program and gave them back their spirituality and a much more REAL connection with Hashem.

In the 12-Step groups there is a consensus that a person can only work the steps properly if they have "hit bottom". As the originator of the 12 steps himself, in his essays entitled, 12 Steps and 12 Traditions, writes in discussing the First Step:

Why all this insistence that every A.A. must hit bottom first? The answer is that few people will sincerely try to practice the A.A. program unless they have hit bottom. For practicing A.A.'s remaining eleven Steps means the adoption of attitudes and actions that almost no alcoholic who is still drinking can dream of taking. Who wishes to be rigorously honest and tolerant? Who wants to confess his faults to another and make restitution for harm done? Who cares anything about a Higher Power, let alone meditation and prayer? Who wants to sacrifice time and energy in trying to carry A.A.'s message to the next sufferer? No, the average alcoholic, self-centered in the extreme, doesn't care for this prospect- unless he has to do these things in order to stay alive himself.

Under the lash of alcoholism, we are driven to A.A., and there we discover the fatal nature of our situation. Then, and only then, do we become as open-minded to conviction and as willing to listen as the dying can be. We stand ready to do anything which will lift the merciless obsession from us.

Rabbi Twerski says that he attended many mussar shiurim [religious ethical behaviour lectures]. Everybody understands the importance of mussar, but 'I doubt if many people walk away with the feeling, "If I deviate from this, I'm dead!"'. Similarly nobody has said, "I tried to do things my way, and I fell right back into my old ways." A person sincere in recovery realizes that his very life depends on following the program, not theoretically, but very practically. If people would accept mussar that way, it would work.

In reality, the twelve step program is a formula for mature, responsible living. There is nothing unique about addicts that make the twelve steps specifically for them. Virtually every character defect that can be found in addicts can also be found in non-addicts, albeit they may be less pronounced. The twelve steps are a way for proper living, and anyone who is ready to apply them to themselves will be able to find relief from many unwanted behaviors or emotional difficulties.

How does the 12 Step Program work?

All addictions share similar roots. We try to fill a void by controling how we feel when we don't like how life makes us feel. The painful truth is that addicts are not looking to feel good, they want to feel less, or at least to control what they're feeling. Addictions are cunning, baffeling and extremely powerful. We are confused people with a complex disease. But the beauty of the 12-Step program is that it is so simple! All that is required of us is a desire to stop using the drug-of-our choice. It's not about intelectually understanding our addiction- all the thinking in the world have gotten us nowhere. This is a program of action, and when the steps are worked with dilligence and faith, even a simple minded drunk can achieve the miracle of sobriety.

The underlying secret to the 12-Step program's success is that we realize that we can't break free on our own, but we come to believe that G-d has the power. 'Without G-d, I can't. Without me, G-d wont'. G-d obviously wants to help us but our character defects have blocked us from connecting to Him and His Power to help. The program doesn't focus on the problem itself, but rather on achieving and maintaining a healthy spiritual state. This allows G-d to enter our lives and in turn, He then gives us the gift of sobriety. As the program is often summed up: “I can't, He can, so let Him”. 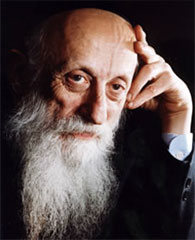 The twelve step program is a formula for mature, responsible living. There is nothing unique about addicts that make the twelve steps specifically for them, besides for the fact that addicts often hit rock bottom which spurs them to work the program with greater desperation. Virtually every character defect that can be found in addicts can also be found in non-addicts, albeit they may be less pronounced. The twelve steps are a way for proper living, and anyone who is ready to apply them to themselves will be able to find relief from many unwanted behaviors or emotional difficulties.